Restaurant from the Sky

Hokkaido “Mountain group” and chef’s contribution to the community.

Restaurant from the Sky, a movie which takes place in Setana town in Hokkaido Japan, is a story about people who’s living focuses on food and nature. Directed by Yoshihiro Fukagawa, who is also known for directing “Journey Under the Midnight Sun and In his Chart”, the movie stars many famous actors such as Yo Oizumi. This movie based its story on a real farming group “The Mountain Group,” who practice Shumei Natural Agriculture and organic farming in the town.

It started back in the autumn of 2008, when Kazuhito Togashi received a single phone call. It was from a Hokkaido government worker, “We want to promote MAFF’s (Ministry of Agriculture, Forestry and Fisheries in Japan) rural project model and are looking for farmers working to revitalize their town. Would you be able to cooperate in this promotion?”

Kazuhito was a farmer who specializes in growing soybeans, rapeseed, and rice through using the Shumei Natural Agriculture method. He immediately got interested in this project, and called up four of his farmer friends in Setana town. The five of them gathered and discussed what they could do for their community. Although their produce was different, they all agreed on one intention. “Bring health to the local people through natural/organic produce.” It started smoothly and naturally. They named the group “The Mountain Group,” since the people in Setana call fishermen “the sea people” and farmers “the mountain people”. They also made a motto. “Success happens only when you give back to the community. Also don’t push too hard, help each other, and enjoy what you trust.”

The members of “The Mountain Group” all had different stories growing up, and grew different produce. Harumitsu Sogai of Sogai Farm is a former pro snowboarder. He left his profession to take over his family business. Right now, he grows over 300 types of vegetables such as tomatoes and asparagus through Natural Agriculture. Hiroshi Fukunaga who runs the Farm Blessed Wind, breeds Berkshire pigs without hormones or antibiotics for sausages, ham, and bacon. Kengo Murakami from Murakami Farm has free-range milk cows that eat non-chemical grass and produces organic cheese. Yoshimori Oguchi of Yoshimori Ranch mainly grows rice, tomatoes, soybeans and lambs by using the Natural Agriculture method.

Their first chance came in April 2009. They participated in the World Cuisine Academic Meeting in Hakodate. At the event, up and coming chefs from around the world participated by using Hokkaido’s local ingredients in their dishes. The Mountain Group presented their cheese, tofu, and processed pork. All the professional chefs were surprised by how good their produce was. They mentioned, “The flavor of the ingredient itself is so full and amazing.” The event was a big breakthrough. Chefs and restaurant owners from all over started to visit their farms.

As they gained confidence in what they do, they joined local farmers’ markets, Sapporo City’s large markets and more. They were able to expand through communicating their philosophy, and eventually succeeded in having their products at Setana’s drive-in market and even in Tokyo’s department stores’ pop ups.

Then, in June 2011, they opened their first Restaurant from the Sky. They invited a French chef from Hakodate in Hokkaido to cook using Hiroshi’s Berkshire pigs, sea urchins from the local port, and produce from other members of the Mountain Group. The main course dish was 5,000 yen (approx. $50) and 21 guests joined. As a result, the event became so well known, that a production company actually made a movie mentioned in the first paragraph.

How did this successful restaurant begin? Like their group name, this also came naturally. As chefs and restaurant owners started to visit their farms on a regular basis, they started to form a bond. After the farm tour or inspections ended, they would all gather to cook using the local produce for a tasting. It just got bigger from there. One Italian chef cooked amazing dishes, and then a French chef followed. Everything the chefs created were out of this world and nothing that the Mountain Group members had ever tasted. Kazuhito thought, “All of the chefs here are first class. We can’t just keep it to ourselves. I really want to open a restaurant, but no one can manage such a place. So, let’s just open a restaurant for one day.’ That is how Restaurant from the Sky became to be.”

The restaurant guests were taken on a 2-hour tour on a bus around the farm. Afterwards, the main course was served to the guests at their tables outside in an open field. All the dishes presented to the guests used ingredients that they just saw on the tour. The chefs prepared beautiful dishes that almost looked like art pieces. The flavor was so delicious, that some people had tears of joy. Moreover, the Mountain Group members worked as servers during the meal. The great thing about that was that the guests were able to ask any questions they had about the food. For the Mountain Group members, there was nothing better than hearing actual customer’s opinions and questions about food and produce they were eating. Listening to customers without any third parties was the reason why they wanted to do everything on their own. Also it was worth learning serving basics and even wine pouring from scratch. The time was truly like heaven on earth. There were so many talks about the food, Then after a short while live bands started playing to add even more enjoyment.

At Setana town, the Mountain Group started to gain a reputation as young farmers trying something new and amazing. People who were not too interested before began to understand what the Mountain Group was, and eventually cooperated with them and their activities. The town itself now takes the environment and food more seriously, and understands what it means to live with nature.

Restaurant from the Sky still continues. What is food? What is life? What does it mean to live with nature? They keep asking these questions through their activities.  It is a feeling you cannot get in everyday life. The restaurant provides with their own food and dishes. Heaven still continues, and the Mountain Group still remembers to emphasize living with life and beauty, and most importantly, to have the time of their lives. 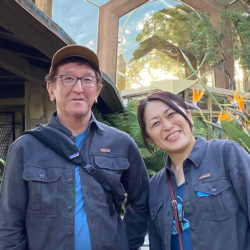